I would first like to say that this is probably the most 21st century thing I have ever done. I am blogging, using photo editing apps, and coding- all from an iPad. Not quite on Zenon’s level, but still. Next thing you know I’ll have little robots measuring out flour for me. But, the reason I am computer-less is that I have officially begun my summer in Greece!!! And thus after this will probably not post until I get back in August. Although follow my other blog, abbydoesgreece.wordpress.com, for all trip-related fun information! Anyway, this is my first post connected to Daring Bakers- a food blog forum where a featured blogger posts a monthly challenge recipe that everyone goes and attacks and then posts the results of on the 27th. Today is indeed the 27th, so it’s time to share my results for this month’s Battenberg cake challenge, posed by Mandy! 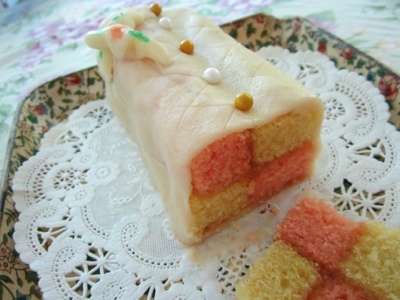 Cool chipped tray. Too pretty to give up on it though!

A Battenberg cake is a traditional English wedding cake in which two colors of cake, traditionally an almond flavored one, are alternately stacked using apricot jam as glue and covered in a marzipan coating. Otherwise known as the world’s smallest game of checkers. In edible form. Instead of the usual flavor, I switched it up just a bit by using lemon and peach cakes, bonded together (hot) using peach preserves, and still covered in marzipan. I figured I might as well ride the summer peach train for as long as possible. Also, fun fact, I had the WEIRDEST obsession with marzipan when I was younger. Not even for the taste part, I just thought it was so so so cool, and would beg my mom to buy it so I could build little animal friends out of it. That never ended up happening, and I am slightly glad for my emotional development that it didn’t. 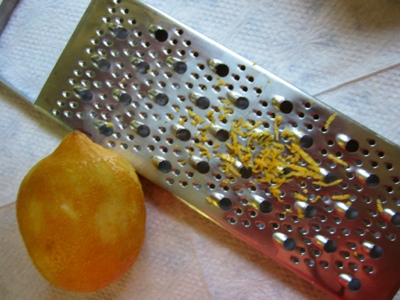 I love zesting/grating things. It’s weirdly gratifying. However, procuring the peach juice was…comical. I needed juice; the logical thing to do would have been to use a juicer on it or something. But I’m not always logical so I decided to peel it, squeeze the peach with my hands over a colander over a plate. SO SQUISHY! It got to the point of pressing the peach against the colander, smushing it with my fist, etc. etc. and I’m pretty sure I only yielded a total amount of juice from peach and a half or something. Not pretty, but actually so much fun, so if you don’t mind being inefficient- do this method! 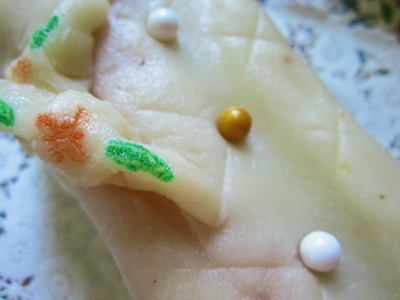 This is a “flower”- aka the marzipan was splitting from the heat, so I patched it up.

The lemon and peach tastes were pretty understated, so if I made it again I would perhaps add lemon juice and more peach. I erred on the side of too little, because lemon extract can be super overpowering. This cake is also probably the epitome of everything that my sister dislikes (peach and lemon are basically the two flavors she doesn’t like) (sorry Jenny) but after much begging, I got her to take a bite. Maybe it was because I was leaving for 6 weeks the next day, but still. She of course didn’t like it, but! Aesthetic powers. That’s what this Battenburg is all about.

3/4 cup caster sugar (aka superfine sugar, but normal should work too)

zest of one lemon

Preheat the oven to 350 degrees F and grease an 8 inch pan with butter. If you have a Battenberg pan, cool, use that, but if not, use this awesome method to divide one pan in half- fold a piece of tin foil over itself a lot of times, fold a piece of parchment over it, and lay the flaps of parchment on the pan, using the butter as glue. Make sure the foil blockade guy is in the middle of the pan.

To lemon-ize half the batter, add the zest and lemon extract to one bowl and stir in. To peach-ize the other half, add the peach juice. I found the colors of the batter to be slightly too similar, so I added just a bit of food coloring to each one just for aesthetic reasons, but there’s no super need to if you stay away from food coloring. Pour each batter into half of the prepared pan. 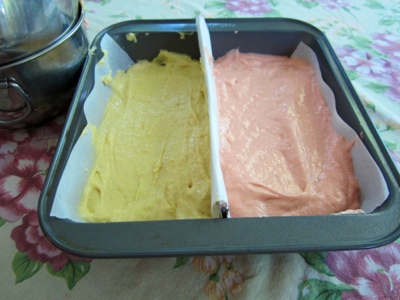 Bake for 25-30 min, until it’s springy when you poke it and a toothpick comes out clean. Cool in the pan for a few minutes, and then turn over the cake on a wire rack.

Once it’s cool, you’re ready to construct the cake! (in my not-21st century sheet of notes I wrote “Battenberg-ize me cap’n.” why.) It’s most helpful to use one of those long, serrated bread knives. Stack the two layers on top of each other and trim off the sides. Then, cut them in half the long way (hot dog style) to get four long rectangles. The recipe said to warm the jam and pass it through a sieve, but the whole sieve thing wasn’t quite working for me so I just warmed it to make it a bit more liquidy and used a marinade brush to apply. Assemble in the alternating pattern (as you see in the pictures) using the warmed-up jam/preserves. 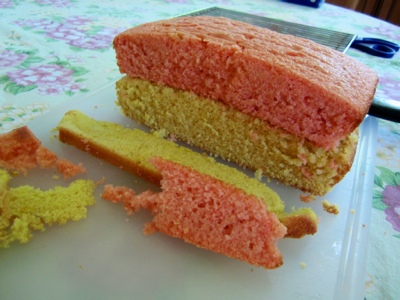 At this point, I stuck it in the fridge for a few minutes to harden up, since it was so so so hot out. I see two geckos having a conversation. Not pertinent to cake, but a fun fact. You might want to chill the marzipan for a little bit too, so it doesn’t get very sticky. When you’re ready to use it, roll it out using confectioners sugar as you would use flour when making dough, to make it less sticky. Place the cake to one side of it and wrap it up! This takes a bit of maneuvering (especially in 95 degree weather) and you’re technically supposed to coat the sides with jam when you roll it, but I forgot to do that. Just work slowly and you should be fine! If you want, score the top of the cake with a knife in a pretty pattern, or decorate with anything you want. Slice and watch people be surprised. Enjoy!

That was an epic set of instructions. But it’s really not that difficult, I promise. The cake bakes really easily, and the end result is super pretty. It tasted a lot better than I expected, too! Because no offense to any English readers, but I’ve never really had a cake from English that blew my mind or anything. The plain almond cake would be great as well, I imagine. This cake is great, because if the ends look ugly with a lot of extra marzipan when you’re making it, you can just chop it off and wow people with the internal design. 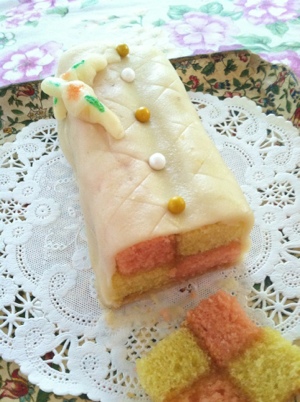 Plus, using marzipan allowed me to make Homestar references at every possible second.