Summer is just around the corner (as I type this during a freezing rainstorm) which means that cherry season is almost here, too. It has indeed already arrived on my cutting board, in multiple shapes and sizes.

I was never properly introduced to cherries until the summer before my freshman year of college, when I was hiking with my dad in preparation for my pre-orientation backpacking trip. We brought PB sandwiches and cherries for snacks, and when we got to a cliff he taught me how to get the pit out and we spent a good amount of time spitting them as far over the cliff as possible. Ever since then, I am an educated human being and now know how to consume a cherry. Before this monumental life event, I just assumed all cherries were maraschino cherries and thus all cherries were ick. But now I love them! And am putting them in waffles! I’ve come so far in life.

The bag of cherries in my fridge was begging to be somehow used in breakfast this morning. Plus, I’ve vowed to use my waffle maker more, and thus– these were born. I didn’t want them to be too chunky though, so I threw them over the stovetop for a bit to soften and sweeten them up. “Caramelized” might not actually be the right word choice. Probably “sauteed” is more apt. But alliteration!!! So we’re going with it. Either way, they are delicious and nutritious (no added sugar!!) (besides the sugar added to the cherries) (doesn’t count) and I hear that if you eat enough cherries you turn into George Washington. Or something. 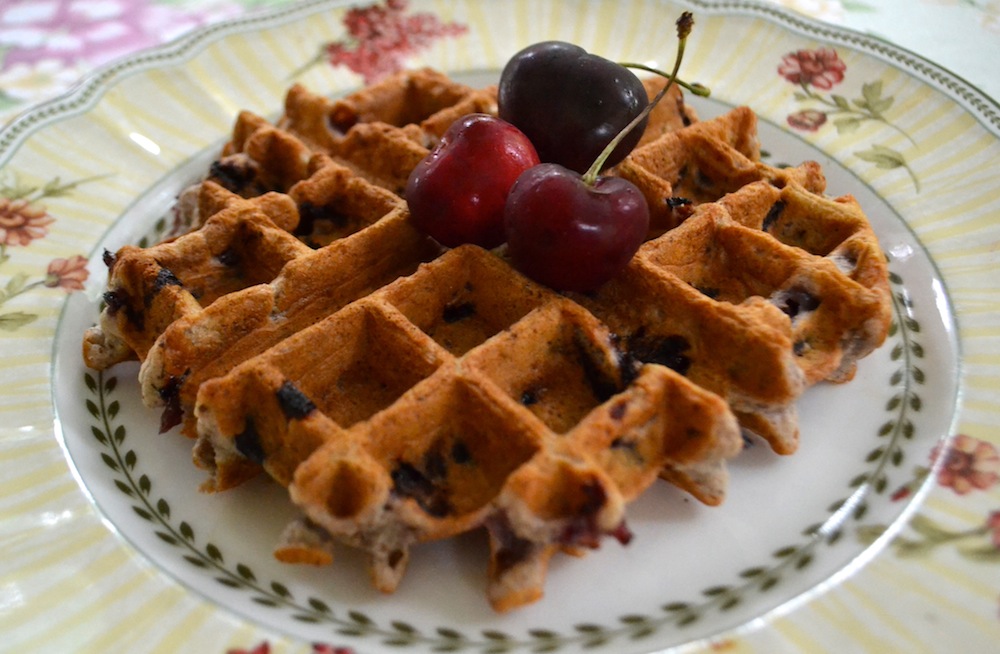 In a small bowl, prepare the flax egg by adding the water to the ground flaxseed, stirring until combined, and letting it sit for 5 minutes. In the meantime, combine the first four dry ingredients (flours, baking powder, salt) in a bowl.

Chop the cherries and put them in a pan over medium heat. Add the brown sugar and 1 tsp vanilla, stirring until dissolved. Lower the heat, cover the pan, and let the cherries juice up for about 10 minutes, or until soft.

Add the almond milk and other tsp vanilla to the flax egg, stirring until combined. Add to the dry ingredients and whisk them all together. Then take the warm cherries and dump them in, juice and everything, and stir until incorporated. The batter will turn a cool/bizarre light purple color which is sort of fun.

Let the batter sit while the waffle maker heats up. Once heated, spray it with non-stick spray, add ~1/2-3/4 cup batter, and cook as instructed by your waffle maker manual. Enjoy! 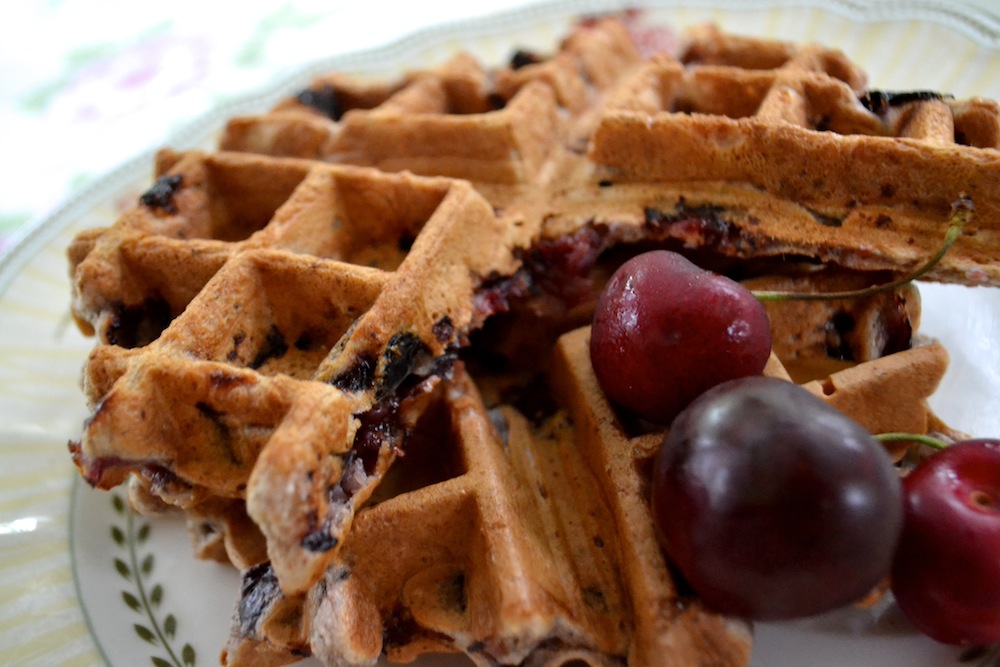 Oh boy. Click that photo to make it full size- cherries oozing ALL OVER THE PLACE!! Omnomnom. Someone get this waffle a band-aid. And yes, shoving into your mouth is an acceptable form of band-aid.